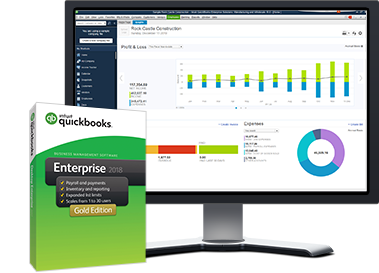 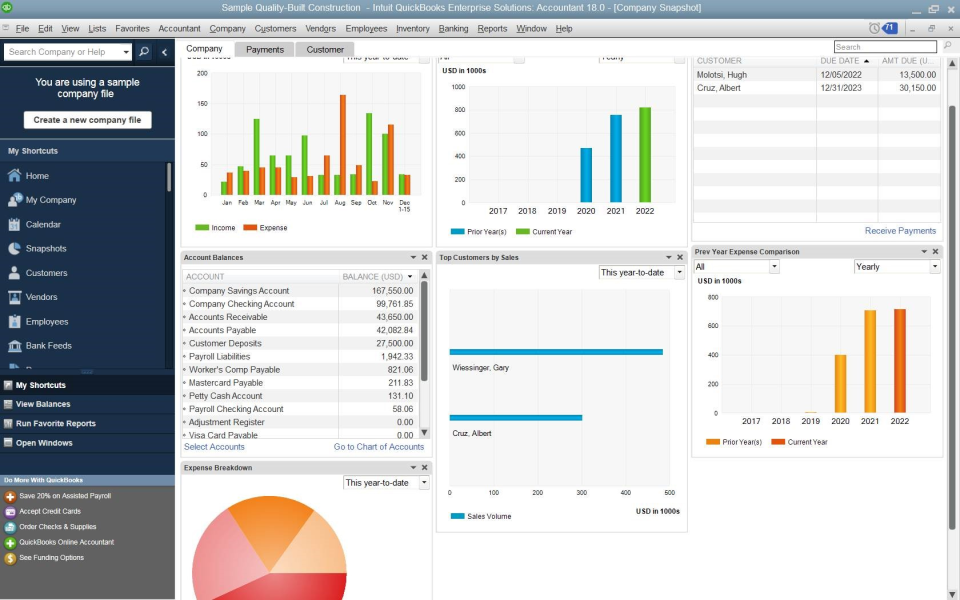 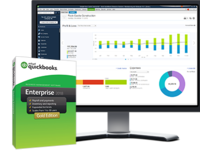 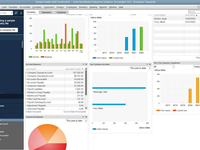 Discount Bookkeeper in your pocket

Commentaires: I've used quickbooks as the administrator for several small businesses. It's a powerful tool that can even be useful for forecasting so long as you keep up to date with it. In my own freelance business, I've started to use Quickbooks Self Employed which is not currently as useful as the Quickbooks I've used for small businesses, but the cost per year reflects the lessened capacity it offers.

Avantages: Not only does quickbooks make bookkeeping seem accessible to anyone with the slightest grasp of numbers, the apps make it easy to keep books up to date on the road. It is only as useful as the the effort you put into the software. It's not exactly intuitive, but there are many resources to support you as you learn. It's very easy to find a Quickbooks bookkeeper to work with that can support your business if it's not your speciality while making the transactions easy for both parties. Specialty apps can add to the functionality of Quickbooks increasing the power of this software.

Inconvénients: Because the detail pulled from the bank can sometimes be quite homogeneous, QBO will try to categorize "Wire" transactions or "checks" to the latest transaction payee. Creating rules to ignore the transactions is tedious and can be confusing to new users of the software that may not realize that its matching to previous transactions. The new model of "tiering" users and how many functions they access seems a bit suspect to me, but so far, we have not reached any limits so I don't know how this will impact us, if at all.

Thanks so much for a detailed review, Amber! We're glad to hear you've been able to easily keep track of each aspect of your business, and other businesses you manage, all while on the go. You can count on us to be there for each business endeavor. We recommend this article that provides a detailed explanation of how to set up and use bank rules (https://quickbooks.intuit.com/learn-support/en-us/banking-topics/how-to-set-and-use-banking-rules-for-downloaded-transactions/00/186468). Additionally, this link offers info about adding, deleting, and changing user access within the account (https://quickbooks.intuit.com/learn-support/en-us/delete-users/add-delete-or-change-user-access/00/185920). You'll find a hyperlink in the same article that will take you to a list of different types of user roles.

Thanks for stopping by to leave a review!
Morgan, The QuickBooks Team

Commentaires: We mostly like it. It dominates the market so much that it has become the default bookkeeping solution. I think the only reason to choose something else would be if your business far outgrows QuickBooks, or if your business type is particularly well-served by a niche product. Some add-on features are useful, such as 1099 reporting. There are many third party add-ons available.

Avantages: The main thing to know about Quickbooks is that it is the dominant player in small business bookkeeping. That means that every CPA knows how to use it and can help you to set it up for your business. Nearly any bookkeeper you might hire has used it before, so their learning curve should be short. It is cloud based, so your data is much safer from disasters than if you stored it on your own server. User support, while less than perfect, is at least plentiful through the message boards and other sources you might find in bookstores or on the internet. Although it is not optimized for government contracting, you can set up a chart of accounts that complies with DCAA requirements, and use the "Class" feature to distinguish between government contracts / customers. With such a large user base and development team, it is reasonably bug-free and feature rich.

Inconvénients: About once or twice a year, they seem to make a change to the user interface...notionally to improve the user interface, but for us it vexing that features we used to know where to find get hidden under some other menu. Some cursing ensues in the office, then we find where the feature is hidden, and work continues as normal. Sometimes they seem to push the add-ons we don't want, such as payroll or financing. The subscription price went up a lot after we had been loyal customers for a couple of years...meaning it is a lot easier to stay with them and pay the higher price than it is to go shopping for an alternative.

Commentaires: It's been great because of the online aspect. I can work from any computer and even work remotely. I've connected to some great apps like "Business Importer" or "Billpay" where i can import data into the system and have taken full advantage of the bank synching feature.

Avantages: We use Quickbooks Online and below are the pro's:
1. It's online and comes with cloud storage for attachments and other
2. Great admin management controls. Not super sophisticated but very useful indeed.
3. GREAT GREAT apps that work and synch with QBO
4. Bank synching that allows you to match expenses and income to the bank to help reconciliations go quicker

Inconvénients: 1. Limited reporting formats. It has several custom reports that you can customize but sometimes it does not have the option for specific reports you would like to see. For example P&L by transaction detail.
2. Customer support is limited, hard to get a hold of, and not the most helpful all the time. A lot of times they refer you to a link
3. Would be nice if you could also customize columns in the entry side of things with customs menus or dropdowns. You have the basic and essentials but would be nice if it was more customizable.

Hi there, Miguel. Maintaining organization is key to running a successful business. We're thrilled to know you've been able to do this with QuickBooks! You've got some great suggestions. To keep up with ways we're working to improve the software, we recommend checking out our Blog (https://intuit.me/2L2zqTv). Additionally, to receive tailored info about specific questions, the Community is available as an alternate route to reach support (https://community.intuit.com/).

Thanks for your review!
Morgan, The QuickBooks Team